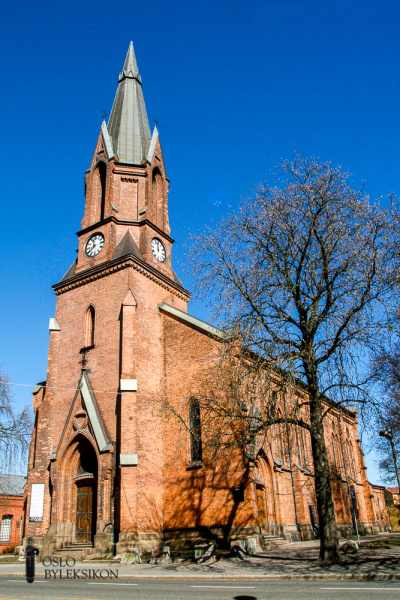 Jakob Church of Culture (Kulturkirken Jakob), The, formerly Jakob’s Church, Hausmanns gate 14, was completed in 1880 and lies on the former square Ankertorget with its west front and entrance from Hausmanns gate. In 2011, the square between the church and Torggata was given the name Ingrid Bjerkås' plass after Norway’s first female vicar. It was formerly the parish church of the Jakob parish, which was established in 1875 and discontinued in 1985.

Kulturkirken Jakob was established in 2000, and Kirkelig Kulturverksted (KKV) – a Norwegian company and record label – moved in with its administration and activities in the form of presentations, exhibitions, concerts and record and TV recordings, although it is still used as a church of The Church of Norway.

The church was built on Ankerløkken Kirkegaard of orange-coloured brick in the neo-Gothic style, with slender columns and pointed arches, which lend the building a soaring, monumental appearance. The architect was City Architect G.A. Bull. The church was completed in 1880 and was consecrated by Bishop Essendrop. It could seat 720 churchgoers. The altarpiece was painted in Rome in 1880-81 by Eilif Peterssen and depicts the three shepherds worshipping the infant Jesus. After the discontinuation of the church as such, the moving of the altarpiece to Grønland kirke was discussed, but this was never realised, although the hymn boards were moved there. Artistic decorations include a relief woodcarving by Dagfin Werenskiold, placed on the frontispiece of the gallery. It portrays Jesus as the Good Shepherd, surrounded by children and adults. Hjalmar Hansen has made two reliefs for the chancel, of the crucified and resurrected Christ. The altar had a silver cross by Domenico Erdmann, executed by the goldsmith Ottar Hval.

The three bells were cast by Det Hermannske Støperi in Memmingen, but are no longer in use. The largest of these bears the inscription ‘Glory be to God in the Highest! And on Earth peace, goodwill toward men!’, the second largest: ‘Remember your End!’, and the smallest ‘Pray, and to you shall be given!’. The organ was built by A. Nielsen and enlarged in 1934 by the organ-builder Jørgensen, but all the organ pipes and other sellable parts of the organ were stolen during the years the church stood unused (1985-2000).

When the school councillor proposed disbanding the Jakob parish in connection with the setting up of new parishes in what was formerly Aker, 6000 protest signatures were collected in a short space of time. Supported by the Bishop of Oslo, the Cathedral Parochial Church Council in 1985 proposed demolishing the church, since there was no basis for its use as a church. However, Riksantikvaren, Byantikvaren, Fortidsminneforeningen, The Oslo Society and the Common Council of Oslo Parishes all wishes for the church to become a listed building – this preservation process was started soon after the church was closed and confirmed in 1992.