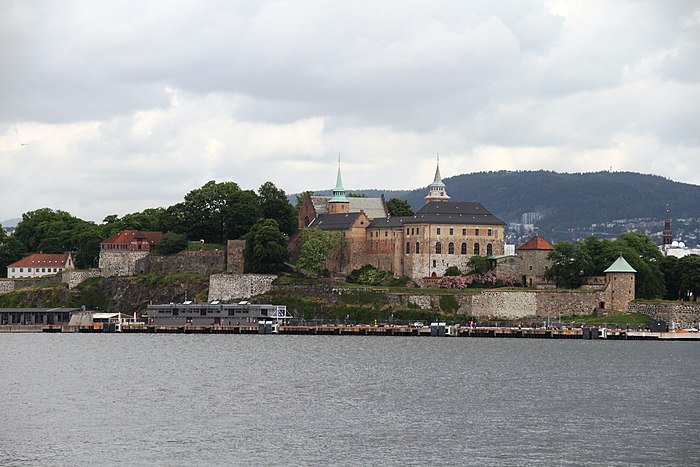 Akershus castle and fortress (Akershus slott og festning), fortification on Akersneset between Pipervika and Bjørvika, consists of three sections: The upper, westernmost part, which is the main fort, with the castle (Upper Fortress or Øvrevoll), below and further east of which lies the Outer Fort (Ytre Festning) with the Fortress Square (Festningsplassen) and various buildings, and to the north lie the outworks, with Kontraskjæret (outer escarpment) and other buildings added later.

The fortification was originally begun by Håkon V, probably in the 1299-1304 period, and in 1308 it was a strong fortified castle that could withstand the attacks of the Swedish Count Erik. In the medieval period, it was a large-scale fortified complex that fully met contemporary requirements. The individual functions such as ladies’ bower, servants’ hall, pantry, etc. were organised around two buildings south and north of the main tower Vågehals (Daredevil) and the smaller tower Fuglesang (Birdsong).

Akershus castle and fortress in 1898. Photo: National Library of Norway

Northwest of this complex, connected to it by a high, broad wall, lay the tower Knutstårnet. To the south lay the so-called Jomfrugård with the castle’s gate tower Jomfrutårnet. In the 1960s, excavations to the west uncovered the ring-wall, traces of which had been found by the architect Holger Sinding-Larsen as early as the beginning of the 20th century. To the south, there was a front castle with a water-tower, stables and outbuildings. The erection of the fortification, which must have been planned in its entirety during the reign of Håkon V, was probably continued by his daughter, Duchess Ingebjørg and her son Magnus Eriksson, and completed during the reign of Håkon VI, who lived there permanently with his queen, Margrete.

Significant changes were not carried out until Christian II added a storey to the salsbygning (a building with a stone-built cellar) of the south wing and carried out other extensions and internal re-arrangements when, as prince-regent, he lived at Akershus in 1506-12. In 1527, the entire castle north of Vågehals and Fuglesang burnt to the ground, although it still managed to survive a siege by Christian II in 1531.

Under Captain Peder Hanssøn Litle, considerable re-building and conversions took place in 1536-51. His successors continued this work, but the siege in 1567 by the Swedes, although unsuccessful, made it clear that modernisation was called for. Something was immediately done, based on proposals from the royal master builder, Hans van Paschen. In accordance with a promise given at the estates of the realm assembly when the king was proclaimed in 1591, Hans van Steenwinckel then planned to turn Akershus into a fortification designed to fulfil the requirements of the new form of warfare. In the 1593-1604 and 1626-46 periods, the essential parts of the Outer Fort were built using the extremely popular Italian bastion system with stone-reinforced earthen embankments; additional work was carried out in 1655-56. Hand in hand with this, the older medieval fort was converted under Christian IV into a Renaissance castle. A great deal was pulled down and rebuilt (including the two towers Blåtårnet and Romerikstårnet) or re-erected (including the Writing Room wing and the Roman Empire wing), so that the place could be used as a residence. Comprehensive interior conversion work was carried out, particularly while Hannibal Sehested lived there as governor general. After the proclamation of a royal successor in 1661 (that of the later Christian V), the Akershus complex was used for such proclamations and estates of the realm gatherings or as a royal residence. From the 1650s to the 1690s, an outer defensive line on the east side and the old Hovedtangen(lower ramparts) were laid out. In 1704-21, Norway’s temporary government, Slottsloven, had its seat at Akershus, which in 1716 withstood a siege by Karl XII.

Under Christian VI the south wing was restored (architect: Supervisor Georg M. Døderlein), with the converted church being consecrated in 1742, and the Supreme Court allocated rooms there. According to royal decrees in 1815 and 1817, it was decided that the Lower Fortress should be dispensed with, and most of the outworks gradually disappeared. But the fighting services made use of a several buildings standing in the area and also built a number of new ones (The Old Riding School, the office building of the Commissary General, the Depot, the Ministry of Defence, the residence of the Commandant, the Gymnasium, etc.). In connection with investigations at the end of the 19th century regarding the history of Akershus by Peter Blix and Gustav Storm, work was begun on conserving and restoring the castle.

Feelings ran high as to whether one ought to pull down the additions of the recent centuries and return to the Middle Ages, or whether one ought to let the architecture of the various periods narrate the history of the fortress. The latter view prevailed, to a great extent thanks to the young Harry Fett. The history of the building process was then clarified via the thorough investigations of the architect Holger Sinding-Larsen in the 1905-25 period, and comprehensive restoration work was carried out under his leadership. In 1929, the architect Arstein Arneberg was commissioned to draw up plans for further work on alterations and interior fitments. The restoration work was discontinued during the war years of 1940-45, but after Akershus came into Norwegian hands once more on 11 May 1945, work was able to continue along the lines of Arneberg’s plans.

During the Second World War, the fortress was used for stationing military units (the barracks in the School Building, Building 49 and a barrack camp on Festningsplassen and Grev Wedels plass). Here layFrontleitstelle 12, the supply commando with stores and depot, among other things for uniforms and boots (moved to Sørumsand in 1944) and the billeting of soldiers from the Army in transit. One of the barrack buildings, no. 47, housed a military infirmary for soldiers in the Army. In Oslo MilitæreSamfundthere was a Soldatenheim, in side-building here there was a lost property supply of weapons and similar equipment – this was later moved to The Engineer Workshop. In the Cavalry Barracks in Myntgata there was a barracks, The former national prison Landsfengselet was used as a prison (from 15 April 1940) and on the north side of The Queen’s Battery there was a place of execution where 42 Norwegian resistance men were executed, and where a commemorative monument was raised after the war. One can still see scars in the bark of several trees from the bullets of the execution squads. The fortress had light anti-aircraft artillery. The old fortified castle was also used for the curious ceremony known as ‘the state ceremony at Akershus’ on 1 February 1942, when Quisling was given the title ‘Minister President’. The Nazis even asserted in their propaganda that this day would prove to be even greater than 7 June 1905, indeed, even greater than 17 May 1814! The ceremony was attended by all the top figures of the NS, and the German occupying power was represented by important figures, headed by Reichskommissar Terboven. After the ceremony, a torchlight procession was organised along Karl Johanstreet to pay homage to Quisling, who stood on the balcony of GrandHotelto receivethis tribute.

On 11 May1945, the Germans surrendered the fortress to the Norwegian home forces, and one of the most famous pictures of the days of liberation was taken by the photographer Johs.StagefromAftenposten.The photograph, which became extremely popular, acquired an almost symbolic significance. It shows one of the “guys in the woods”, later Colonel Terje Rollem, in a sports jacket, knickerbockers and rose-pattern long socks standing at attention while the fortress commandant, Major Josef Nichterlein gives a military salute to one of the Norwegian victors. Standing beside the commandant is his adjutant, Captain Hamel. On the King’s Bastion the German Swastika flag was struck, and the Norwegian flag could once more be hoisted over the fortress. After the war, what had previously been the National Prison and had also been used as a prison(Kriegswehrmachtgefängnis) for people from the Norwegian resistance, was once more put to use, this time for traitors and a number of German war criminals. In October 1945, 846 Germans were prisoners here. Quisling, who had been placed under house arrest by the police at the end of July at Møllergata 19, was later interned here until he was executed by firing squad on the west side of Skarpenord powder magazine on 24 October 1945, after having been condemned to death in the old ceremonial hall of the former Masonic Lodge (Logens festsal) on 10 September. Several others of those convicted of war crimes and high treason were also executed here. The School Building, no.49, which had formerly been the barracks of the military engineers, became in 1945 a barracks for the military academy Krigsskolen.

After the war, the fortified castle was officially opened for festivities in connection with the 75th birthday of Haakon VII in 1947. Restoration work and new constructions were completed – the royal sepulchral chapel at the smaller tower and the wardrobe above the walls of the larger tower – so that Akershus is now the finest national reception location and is solely used by the government. Restoration was completed in 1962. The North Hall was refurbished in 1976, and given the name Olavshallen, after Olav V. Queen Maud and Haakon VII as well as Crown Princess Märtha and Olav V lie buried in the sepulchral chapel at Akershus. In addition, the mortal remains of Sigurd the Crusader along with the skulls of Håkon V and Queen Eufemia have been bricked into the cellar. In 1951, The Friends of Akershus Castle was founded to promote the restoration work. Supervision is the responsibility of The Committee for Akershus Castle and Fortress Area, of which the Akershus Commandant and the Directorate for Cultural Heritage are permanent members.

For as long as Akershus was a functional fortress, the area was without trees. Military considerations called for an open view. At the end of the 18th century, the commandants began to plant trees along the embankments in order to emphasise the main lines of the fortifications. The clergyman J.N. Wilse describes around 1780 an extremely beautiful, ruler-straight avenue along the west side of the Fortress Square. The remains of it are still standing. In the so-called cannon park at the north end of the avenue the students of the military academy raised in 1786 a monument to General War Commissioner Peder Blankenborg Prydz, designed by the architect J. H. Rawert – the oldest sculpturally designed monument in the city (now replaced by a copy). For a long time, the ramparts with the lovely planted trees were one of the most popular places for taking walks. In the restoration work carried out in the fortress area during the 1970s and 1980s, much emphasis was placed on the attractive park environment. ‘Munkedammen’ from the feudal lords’ garden at the end of the 16th century was re-created in 1965. The glacis to the north on the outer escarpment was re-established, based on a historical model and treated in a parklike way. During this project, it was necessary to carry out a considerable thinning of the tree population at the fortress, so as to bring out the profile of the castle in the cityscape.

On and close to the fortress there are a number of war monuments: the National Monument at the Fortress Square, the commemorative monument to the executed men of the resistance, the monument to those in the air force who died and soldiers who fell in UN assignments, the statue of General Otto Ruge, the statue of Max Manus and, outside the fortress walls, at the corner of KongensgateandAkershuskaia,the monument to the Norwegian Jews who were deported to their death in Germany, the work of Antony Gormley and called The Place of Remembrance.