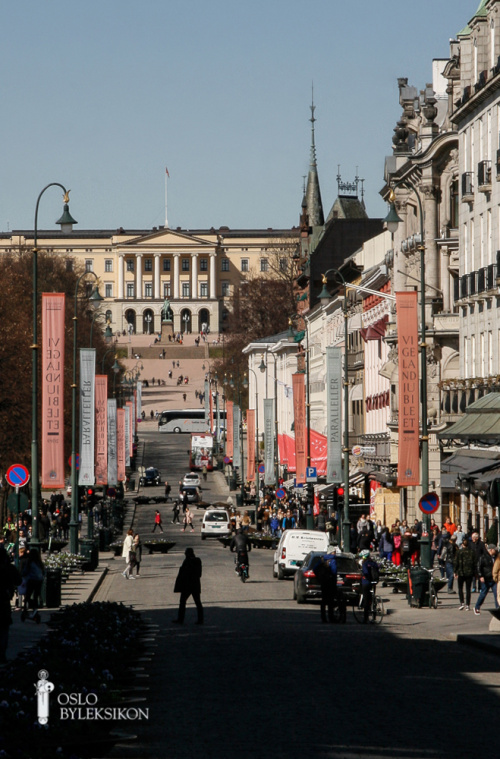 Karl Johans gate leading up to The Royal Castle. - Photo: Astrid Ledang / Oslo Byleksikon
Karl Johans gate, Sentrum, the main street of Oslo, extends from the station square Jernbanetorget to the intersection Frederiks gate/Henrik Ibsens gate at the beginning of the rise to Slottsplassen. It was named in 1852 after Karl III Johan (1763–1844, in Sweden Carl XIV Johan), king of Norway and Sweden 1818–44. The east section of the street is the oldest, and the various parts of it, from c. 1750 onwards, had different names – Østre Gade (from Strandgata to Dronningens gate), Kirkebakken (from Dronningens gate to Kirkegata) and Kirkestrædet (from Kirkegata to Øvre Slottsgate); from c.1840 this entire section of the street was called Østre Stræde (later Østre Gade)and it was not renamed Carl Johans Gade until the 1860s. West of Øvre Slottsgate the street originally continued as a narrow alley (Stabelkroken) up to the outer city buildings at present-day Stortings plass, and from here it continued as Ruseløkkveien westwards to Abelhaugen. From the late 1830s, the street was developed westwards from Øvre Slottsgate along the north side of present-day Eidsvolls plass and Studenterlunden, and from 1840 this section of the street was known as Slotsveien.

The highest point of the street is at Egertorget; from here one has a view of the two backdrop motifs: the royal palace Slottet with the statue of Karl Johan-statuen in front of it to the west, and the old railway station Østbanestasjonen to the east. The western section has a distinct ‘hammock’ profile.

Egertorget also forms a dividing line between the eastern section of the street, with its shopping precinct feel, and the western section, which is dominated by such public buildings as Stortinget, Universitetet, Nationaltheatret and Slottet.

Karl Johans gate is the city’s parade street. It is along this street that the procession of children walks up to the Palace every 17 May, and here that the corteges of cars glide through the flag-flanked street on official state visits and other solemn public occasions. On royal visits, triumphal arches and similar decorations have even been raised in the street, e.g. on the visit in 1882 of Crown Prince Gustav and Crown Princess Victoria. For the wedding between Crown Prince Olav and Crown Princess Märtha in 1929, the street was decorated with ice obelisks.

In 1940, the celebration of 17 May was done away with by the Administrative Council, although both the NS authorities and the Germans used the street for parades – as well as propaganda – during the war. One of the shop windows of Grand Hotel, known as the Grand Window, had regular topical propaganda exhibitions, done by Harald Damsleth.

From the 1880s, it became usual for people to walk along the upper part of Karl Johans gate, beween the University and Grand Hotel (‘from the Clock to Grand’). It was here one went to see and be seen, and this part of the street soon became popularly known as ‘Courting Country’, because the young, uniformed offices and cadets used to court the young ladies of the city here. Henrik Ibsen, during the last years of his life, used to walk along this part of the street daily – his goal was Grand Café, where he occupied his habitual seat every day at 12 noon. During the decades after the Second World War, this section of the street was known by the young people as ‘The Strip'.

Street lighting in Karl Johans gate was a controversial issue for many years. In the 1970s, the lighting fittings from the 1920s were replaced by modernist, rectangular lamps that provided a better light, but which their opponents referred to as ‘light showers’. On the initiative of the Society for the Welfare of Oslo, the new lighting was replaced by copies of the former type, in time for the Liberation Anniversary of 1995. In connection with the centenary of Norwegian independence in 2005, a new upgrading of the western section of the street was carried out, narrowing the roadway and broadening the pavement. Refuse stands and benches were replaced, and the Narvesen kiosks were replaced by new, container-like structures. New, uneven cobbles replaced the asphalt. Slottsbakken retained its former width, something which led to a visible difference between the streets above and below Frederiks gate. This met with considerable criticism. Since it also meant that Karl Johans gate had become unsuitable for cyclists and that insufficient consideration had been taken of users of wheelchairs at the pedestrian crossings, this work had to be redone. The upgrading was supervised by Capital City Action, a co-financed project by the government, Oslo Municipality and the proprietors of the precinct. Professionally responsible was Thomas Thiis-Evensen, with the elaboration mainly designed by the Snøhetta office of architects. In 2017, the feel of the street was considerably altered by the positioning of large sewer pipes along the sides as a terror precaution – these were later replaced by large metal flower pots.

For many years, Karl Johans gate was also an important street for public traffic, with the first tram line laid down as early as 1875. From the 1970s, however, the trams were moved to other streets, and the east section of the street, from Egertorget to Jernbanetorget, was turned into a pedestrian street (with access for intersecting tracffic in the blocks from Kongens gate and eastwards). Since 2005, the west section has been simply a local street, with limited access to traffic in both directions – it was formerly used by bus routes travelling westwards.