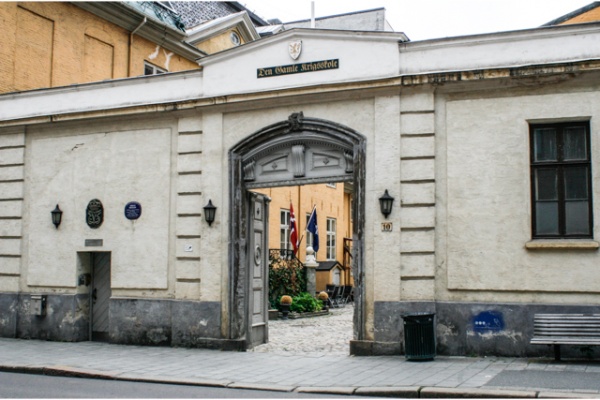 . - Photo: Astrid Ledang / Oslo Byleksikon
Military Academy building (Krigsskolebygningen), The, Tollbugata 10, was originally a town house built during the time after the founding of the city in 1624 by the chancellor of Norway, Jens Bjelke. His son, Jørgen, sold the house in 1662 to State Commissioner Nicolai Poulsen Orlof; it was later owned by the Hausmann family. From General Caspar Herman Hausmann’s daughter, Helene Margrethe, widow after Colonel Chr. Ulrik Storm, the house passed on in 1761 to the son, Chamberlain and later Member of the Privy Council Caspar Herman Storm, who became Prefect of Akershus diocese in 1763. He did not feel that the former chancellor dwelling adequately suited his station and in 1765 he had it converted into its present form, including a mansard roof, based on drawings by the architect Reichen. Above the walled-in gateway to Dronningens gate one can see the Storm family’s coat of arms, as well as that of his wife’s family, Mangelsen. After Storm went bankrupt, he had to lay down his office. He moved to Denmark in 1772, after which the house was for a while the residence of the retinue of the vice-regent, Prince Carl of Hessen, while the prince himself lived on the neighbouring premises. The house then had a number of owners, all of whom ran into financial difficulties: Zahlkasserer Jacob Juel was the next owner – in 1783 he was taken for embezzling government funds and had to sell. In 1785 the house was auctioned off to the wholesale merchant Jess Anker, the younger brother of Bernt Anker. For quite a time he lived a luxurious existence there, but eventually he went bankrupt in 1798. The house was then sold to the merchant Pascal Paoli Essendrop, who was arrested the following year for forgery. Bernt Anker had to settle up after his brother, and in 1802 he donated the building to The Military Academy.

An obelisk of syenite was raised in front of the academy in 1841, in commemoration of General Diderik Hegermann. The Military Academy moved out in 1899, and the house was taken over by the Engineering Service’s NCO Academy. The Military Academy returned in 1930. The military college also had rooms in the building in 1932-34 and 1936-38.

From December 1940, the building was used by the Hird, a paramilitary Nazi organisation. It housed among others the Hird General Staff, the Hird Navy and the Alliance of Front-Fighters. In December 1941, fighting took place outside the house between the Hird men and local youths. As a result of a sabotage operation on 6 November 1944, carried out by Aks 13000, the building suffered considerable damage – including the destruction of a large part of the facade facing Dronningens gate. Since the operation was simply meant as a demonstration against the Hird, only 30 kg of plastic explosives was used. After the liberation, the building was taken over by forces from Milorg.

The Military Academy moved out in 1969, and later established itself at Linderud leir. The building is now the reception venue of the Army and also contains the war-historical department of the Defence and its library. It was put up for sale by the latter in 2018. It is a heritage building, and marked with one of The Oslo Society’s blue plaques.