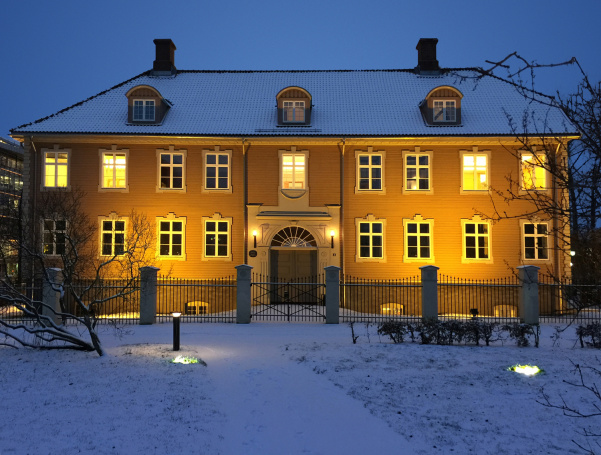 Military Hospital, Grev Wedels plass 1, the re-erected wooden building from the Empire Quarter in Akersgata. The building was originally built in 1807 as a military hospital for the existing Damløkken, designed by Jens Bang, MD and architect Johan Raphael Poúsette, as an unassuming unpanelled L-shaped two-storey building with a long and a short wing and with small-paned windows. In the 1820s, the building became part of the new national hospital Rikshospitalet when it was converted and given the imposing outward appearance that it has subsequently retained. It was given transverse panelling, a classicist portal when driving through the short wing (which admittedly was closed down) and new windows with large panes, casings with corner mouldings and keystones. In charge of these conversions were Mine Director Chr. A. Collett and Architect Chr. Grosch. The building was used as Rikshospital between 1826 and 1883, when it was taken over by the government for ministerial offices. Later on, the police and the prosecuting authority were housed here. This also applied during the war, when the Police Department and Minister of Police Jonas Lie had offices here. Just before the liberation in 1945, an action was carried out under the leadership of Gunnar Sønsteby to gain possession of police archives of the NS regime.

The plans for the changed use of the Empire Quarter as a new area for government buildings led after 1945 to a lack of maintenance and decline. In 1952, the demolition of the Empire Quarter was approved despite massive protests from conservationalists. The end of the long wing was dismantled and stored in 1954, while the rest of the building was left standing until 1962, and used as an office during the construction period. When The Highrise of the Government Quarter was completed, The Oslo Society carried out an antiquarian dismantling of the rest of the building, which was then stored.

In 1980, a foundation was established with the aim of re-erecting the Military Hospital on the square Grev Wedels plass. This re-erection began in 1981, the architect in charge being Torp & Torp, the contractor  F. Selmer. The building was re-erected and refurbished for new use on 11 May 1984. New steel railings based on the original ones were added in 1991. The Military Hospital and the park on Grev Wedels plass are a heritage site.

In 1994, the Military Hospital was awarded the Europe Nostra cultural preservation prize and medal. Among the tenants of the building have been the Norwegian Cultural Council and The Oslo Society. Now the Norwegian Armed Forces. At the entrance there is one of The Oslo Society’s blue plaques.