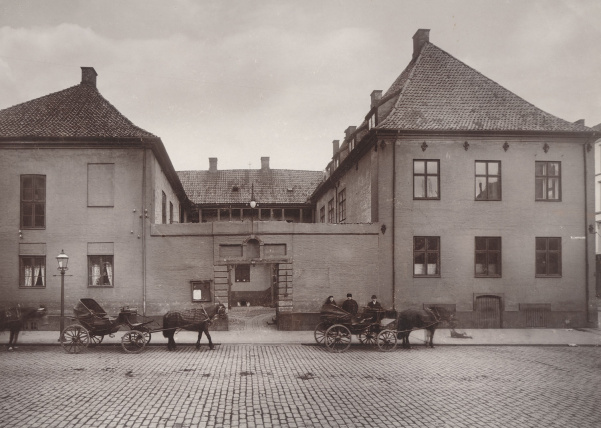 Rådhusgata 7 in 1901. At this time the house was used as a police station. Photo: Severin Worm-Petersen / Oslo Museum / Creative Commons

Rådhusgata 7, city center, the second city hall of Oslo (1734-1843), is one of its oldest preserved structures. The oldest section dates from c. 1625-30 – the year 1647 on the anchor plates of the facade may possibly refer to an extension in connection with the land commissioner Johann Garmann taking over the house that year as a private dwelling. The house was subsequently called Garmanngården. Originally, the house had a number of bays overlooking the street, two large stepped gables towards the courtyard (one in the actual facade overlooking Dronningens gate and one on the section towards Rådhusgata) and a large stair turret towards the courtyard – all of these features disappeared during a conversion around 1760.

In the 1680s, the building was a residence for Vice Governor-General Just Høeg. Several of the owners in the 18th century lost the house because of financial offences – Publican Frantz Pedersen forfeited the house in 1705 because he had defrauded the customs, and Victualler Helle Holst suffered the same fate in 1712, after having supplied inedible bread to the army. Both Holst and a later occupier, Prefect Vilhelm de Tonsberg, carried out conversions and extensions to the house.

When Christian VI visited Christiania in 1733, he soon realised that the capital’s city hall (Nedre Slottsgate 1) no longer could be used, and he therefore donated Rådhusgata 7 to be used as a city hall. Tonsberg’s extension was pulled down, and instead a city courtroom was built. Various municipal offices moved in on the ground floor in the corner building, while the council hall was established on the first floor. This hall was used both as a courtroom, meeting room for the municipal council and the municipal corporation as well as a venue for theatre, concerts and festive occasions. In one of the vaulted cellars the deputy mayor Johan Piper rented space for a wine bar in 1745. 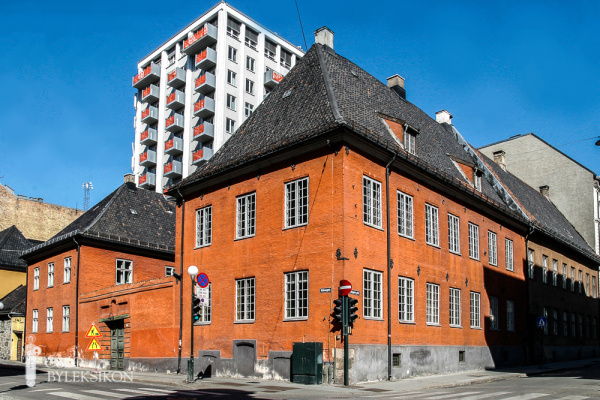 The City Hall also served as a prison. On the top floor of the main building rooms were eventually established for imprisoned debtors. The prison itself lay in the cellar in the side-building facing the inner courtyard (built c. 1750), and on the storey above it lay the cells for drunks. In 1787, a new prison building was erected facing Rådhusgata (arch. Hans Christian Lind). On the first floor of one of the side-buildings Hans Nielsen Hauge was held prisoner from 1804 to 1811. This building has been preserved at the open-air museum Norsk Folkemuseum on Bygdøy.

During the 19th century, space for the many services housed at Rådhusgata 7 was too small, and eventually only the police remained; from 1866 to 1963 the building functioned as a sub-police station, Rådhusgata politistasjon.

Rådhusgata 7 became a listed building in 1927. For many years The Association of Norwegian Writers used the house and from 2019, The Oslo Society has offices here. The house is marked with one of The Oslo Society’s blue plaques.