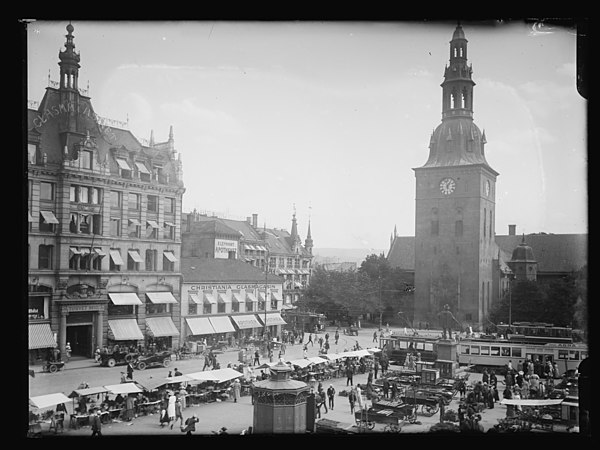 The Main Square between 1899 and 1930. Photo: Narve Skarpmoen/ National Library of Norway

Main Quare (Stortorvet), Sentrum, the main square in front of Oslo Cathedral. The square is bordered on the east by Kirkegata,on the south by a row of houses, on the west by the roadway linking Kongens gate and Møllergata and on the north by the eastern extension of Grensen. On the square, where flowers are now sold, there are three works of art. In the middle of the square there is a statue of Christian IV, the founder of Christiania, the work of CarlLudvigJacobsen,unveiled on28 September1880. In the southeastern corner there is an animal fountain by Skule Waksvik, unveiled in 1955, when it stood on the west side of the square, in front of the main office of Christiania Bank og Kreditkasse. The sculpture – designed as a rectangular basin in cyenite with a base, and with a cock and two hens on top – was given to the city by The Oslo Society and Christiania Bank og Kreditkasse. In the western part of the square stands the fountain sculpture ’Water in Stone’, made of red granite, by Anne-Marie Backer Mohr and Bjart Mohr. They won a competition for a square decoration in 1985, but for financial reasons it was not ready for mounting and unveiling until 1994. In the northwest corner of the square there is a Narvesen kiosk, and in 2018 ’retro’ street lamps were put up on the square – copies of the first electric street lamps in Christiania erected here in 1892.

The city square originally lay at the top of Rådhusgata (Christiania Torv). There lay the city’s church and city hall, and a public water pump stood at the centre of the square. From the 1640s, the Christiania market used to be held there every year in February. After the major city fire of 1686, however, it was decided that the church and the building closest to the fortress were not to be rebuilt. A plot of land was found for the new church outside the actual city ramparts, in the area east of Store Voldport. Here there was originally a large pond, and large moats stretched out in front of the ramparts. Across the moat at Store Voldport (roughly where the present intersection between Karl Johans gate and Kongens gate lies) there was a wooden bridge. To the east and west, the pond was bordered by two outcrops of rock with projecting bastions, one of them on the present church site and the other roughly where the Kreditkassen building was later built.

The church was consecrated in 1697 (Oslo Cathedral). The pond west of the church was filled in once more around 1700 – at approximately the same time as the ramparts were demolished. In 1717, it was prescribed that the area could be used for the dumping of rubbish and waste. Store Voldport was destroyed during the siege by Karl XII in 1716 and demolished in 1718. As a replacement, a guardhouse (Corps de Garde, Kortegården) was built on the east side of Kongens gate.

The buildings round the open square were built in several stages. The first buildings were built on the south side as early as the 17th century; on the west side it took longer because the citizens resisted incorporating the suburb of Grændsen into the city. The plots on the north side remained undeveloped for a long time; they lay in front of a large garden which, at the beginning of the 18th century, belonged to General Caspar Herman von Hausmann. The corner plot facing the church (Stortorvet 11) was built on around 1750.

The planning of the square started around 1730. In 1735, the citizens demanded that the square should be done up, but they were themselves obliged to take care of all the subsequent landfill, and several thousand cartloads had to be fetched. In 1736, Christiania market moved to the square, which was officially opened at the same time.

The first city post-box stood on the square. It acquired its first street lighting – four weak train-oil lamps – in 1770. The famous gas lamp Fiat Lux! was lit on 8 January 1848; it was later moved to make room for the Christian IV statue.

The Christiania market was held every year on Stortorvet until 1899, later there were several years with annual horse markets. But as early as the mid 18th century ‘axle markets’ were held several times a week, where the farmers who brought wares to the city were allowed to offer them for sale for two hours before they could be sold freely to the local citizens. This marked the beginning of the daily market dealings on Stortorvet that have continued until the present day. Gradually, most of the market trading has moved, among other places to Nytorvet (Youngstorget), and now it is mainly florists who use Stortorvet to sell flowers.

The decline in market trading here was also linked to the fact that the square, from the end of the 19th century onwards, became an important traffic hub, with several tramlines and taxi ranks, and this led to a lack of space. The terminus of the  Ekebergbanenused to be in the centre (with a loop for changing tracks) on Stortorvet until the 1960s.