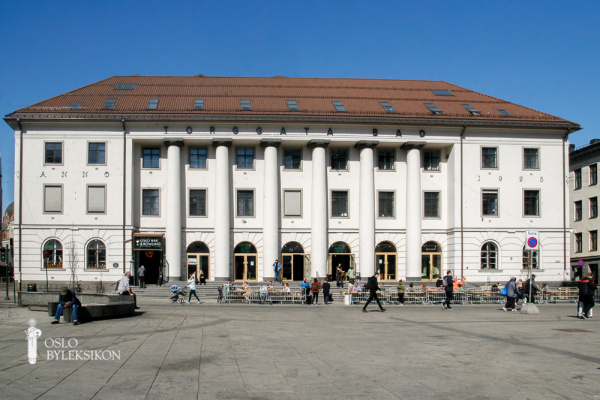 Torggata Bath (Torggata bad), Torggata 16, was the name of the public baths which lay here in the 1861-1980 period. The first baths were built here in 1861. Thorvald Meyer commissioned his builder, Thøger Binnebølle, to erect the ‘Wash House and Baths’. The following year, Meyer donated the establishment to Christiania Municipality and it continued to operate without any changes worth mentioning until the late 1920s. The old baths were then demolished and new baths built in 1931-32 in the neo-classicist style (archs. Morgenstierne and Eide). The baths were the first to feature a 25-metre pool and they were owned by the municipality until they closed in 1980.

During the war, the baths were sequestered by the Germans from 4 September until the liberation. Here there was swimming training for German soldiers every day from 08.00 to 13.00, except on Sundays, training for elite swimmers on Tuesdays from 20.00 to 22.00 and for women on Fridays, from 20.00 until 21.00.